What is Media Server?

Let’s start from the basics to learn the answer to the question of what is media server. That’s why we are beginning with Media Server 101. The word “media” is the plural of the Latin word “medium” which means environment or tool(1). Even though it has been used in many domains, it is mostly encountered in the communication domain both socially and technically. Media is all of the devices and methods used in storing information in several formats and delivering it to the masses. It can be generally classified into two main categories as printed (newspapers, publications, etc.) and digital (cinema, radio, television, etc.). In this blog post, we will mention the media server which processes and transfers digital media and answer the question of what is media server.

What Is Media Server?

Before answering “what is media server?”, it is better to mention the video which is a leading digital media type as a result of electronic devices getting popular, increasing the speed of internet access and people’s changing habits on social communication, also about the role of video in total communication traffic and future vision of video.

When we review the Monthly Internet Data Transmission graph in Figure 1 prepared based on the Cisco VNI 2016 data, it is seen that the video is in the first place among the dataflow worldwide both nowadays and in the future. For example; while video data traffic is about 40 ExaByte (1 million TB) by the year 2016, it is predicted that this number will be about 110 ExaByte in 2020. Another detail in this graph is that the increasing acceleration of media. For example; although all types of media have an increasing trend, the acceleration rate of the video is obviously a lot higher, and this increases the part of video among total data.

Let’s see the answer to the question of what is media server. The basic definition of media server is a complete hardware and software(media server software) solution that provide a flexible infrastructure for live and recorded audio/video streams in different formats for different kinds of sectors although it can be specialized in technical functions. 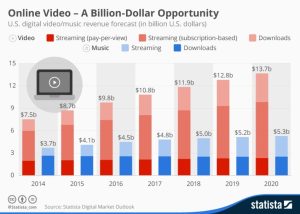 Another point that should be investigated is that the financial reflection of the video market which dominates the dataflow. According to the financial data prepared by Statista in Figure 2, while the market size of the video was 7.5 billion $ in 2014, it is predicted that it will be doubled to nearly 13.7 billion $ in 2020. We can clearly infer from the two graphs that audio and especially video have a very important role in all types of media both in qualitative and quantitative ways. This massive increase both in data size and in the financial market affects directly all components in this ecosystem (content providers, advertising sector, hardware producers, media server market etc.) in a positive way.

What are Media Server Usage Areas?

We talked about the answer to the question of what is media server and talked about the media server ecosystem, now we can take a look at its uses. As an example of today’s applications, media server software works in digital IP television broadcasts, in popular video websites, in music platforms with millions of users, and even in the infrastructure of systems recording and processing camera recordings.

You can try Ant Media Server for free with all features!

You can download native Android and iOS WebRTC SDKs and integrate them into your applications for free!