What is WebRTC and how does it work? Real-time communication with WebRTC

As communication technology develops, live streaming becomes more and more common on the web. Thanks to WebRTC, live streaming has come a long way from minutes of latency to ultra-low latency, or my favorite term, real-time latency. Anyone who is interested in live streaming, especially real-time streaming, has definitely heard of it. There are also WebRTC servers and they are just as important as WebRTC.

In this comprehensive WebRTC tutorial, you will get detailed information about them. So, let’s start diving into the world of web real-time communication by answering the question of what is WebRTC!

WebRTC is HTML5 compatible and you can use it to add real-time media communications directly between browser and devices. One of the best parts, you can do that without the need for any prerequisite plugins to be installed in the browser. Webrtc is progressively becoming supported by all major modern browser vendors including Safari, Google Chrome, Firefox, Opera, and others.

Thanks to WebRTC video streaming technology, you can embed the real-time video directly into your browser-based solution to create an engaging and interactive streaming experience for your audience without worrying about delay.

WebRTC tutorial series: what is the WebRTC streaming protocol and how does it work?

We basically learned what is WebRTC. Now let’s see how it emerged. One of the most important challenges for the web is to enable human communication through voice and video: real-time communication or RTC for short. Especially after Covid-19, we all need to communicate with each other regardless of distance and location. So, RTC is our new way to communicate.

Google joined the video chat market with Gmail video chat in 2008. In 2011, Google introduced Hangouts and it was originally a feature of Google+, Hangouts became a stand-alone product in 2013. Google loved RTC technologies. It acquired GIPS, a company that develops many components required for RTC, such as codecs and echo cancellation techniques. Google open-sourced the technologies developed by GIPS and engaged with relevant standards bodies at the Internet Engineering Task Force (IETF) and World Wide Web Consortium (W3C) to ensure industry consensus. In May 2011, Ericsson built the first implementation of WebRTC. Ericsson created the first implementation of WebRTC in May 2011. And this started the future of the communication industry.

Many web services used RTC such as Skype, Facebook, and Hangouts but to use them, downloads, native apps, or plugins were needed. Downloading, installing, or updating plugins is complex. Usually, some error occurs and the plugins don’t work properly. Using plugins may require some expensive licenses or technologies. It is also really hard to make people download a plugin or something.

WebRTC emerged based on these principles that its APIs should be open source, free, standardized, and built into web browsers.

Interactive Connectivity Establishment (ICE) is used in problems where two nodes across the Internet must communicate as directly as possible, but the presence of NATs and Firewalls makes it difficult for nodes to communicate with each other. It is a Networking technique that makes use of STUN (Session Traversal Utilities for NAT) and TURN (Traversal Using Relays Around NAT) to establish a connection between two nodes that is as direct as possible.

STUN Server is responsible to get all the addresses of a machine. For example, our computers generally have one local address in the 192.168.0.0 network and there is a second address we see when we connect towww.whatismyip.com, this IP address is actually the Public IP address of our Internet Gateway(modem, router, etc.) so let’s define STUN server; STUN servers let peers know theirs Public and Local IP addresses. 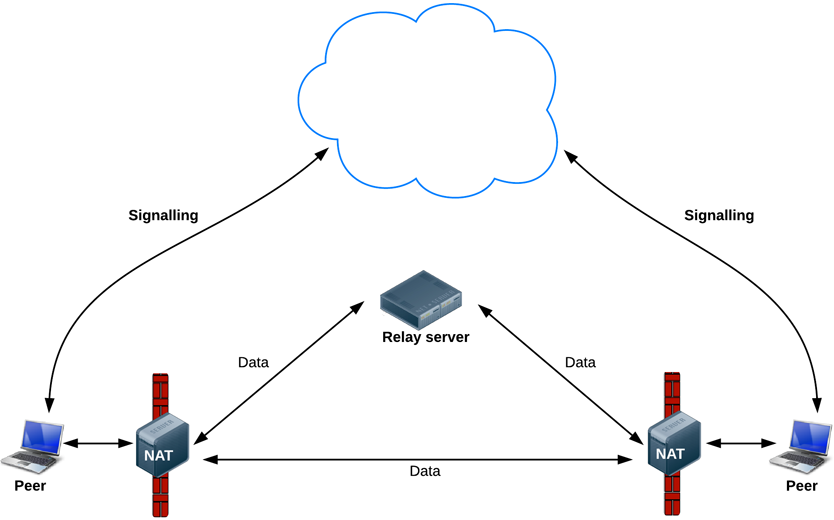 TURN (Traversal Using Relays around NAT) is a protocol that assists in the traversal of network address translators (NAT) or firewalls for WebRTC applications. TURN Server allows clients to send and receive data through an intermediary server. The TURN protocol is the extension to STUN. Sometimes, addresses got from the STUNserver cannot be used to establish for peer to peer connections between peers because of NAT/Firewall. In this case, data relays over the TURNServer

RTP is a mature protocol for transmitting real-time data on top of UDP. Audio and Video are transmitted with RTP in WebRTC. There is a sister protocol of RTP named RTCP(Real-time Control Protocol) which provides QoS in RTP communication. RTSP(Real-time Streaming Protocol) uses RTP protocol as well in data communication. 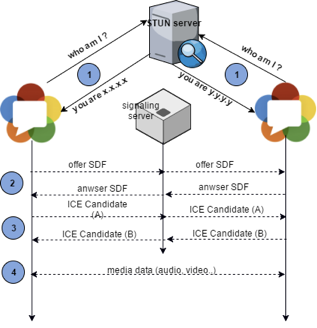 However, latency occurs during the live stream of the video. Streaming latency is basically the delay between the camera capturing an event and the event being displayed on viewers’ devices. For some usage scenarios, this latency should be kept to a minimum. Here’s where WebRTC video streaming protocol saves our lives. 🙂

What is a WebRTC data channel?

WebRTC data channel is another channel in WebRTC other than video and audio. In the data channel, you can send any kind of information to other clients. Data channels can be utilized in various use cases including chat, control messages, or file sharing. Ant Media Server provides a generic data channel infrastructure that can be used in all use cases.

How does WebRTC work? 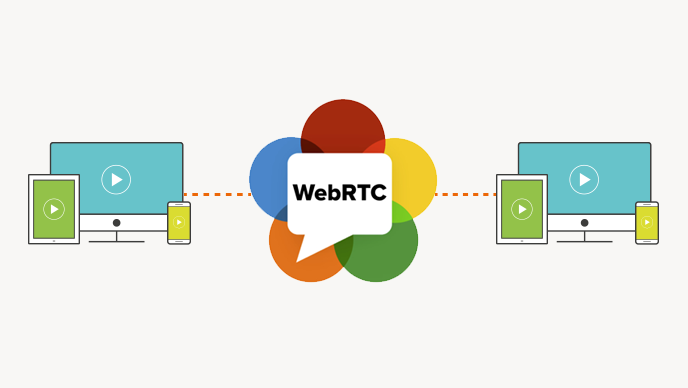 After the question of what is WebRTC, one of the most frequently asked questions is whether it is safe for streaming. There are several ways a real-time communication application or plug-in can compromise security. For example:

How does WebRTC solve these security issues?

A WebRTC media server is a type of “multimedia middleware” (located in the middle of the communicating peers) through which media traffic passes as it passes from source to destination. Media servers can offer different types, including processing media streams and group communications (distributing media streams created by a peer between several receivers i.e. Multi-Conference Unit, acting as an MCU), mixing (converting several incoming streams to a single composite stream), transcoding (adapting codecs and formats between incompatible clients), recording (permanent storage of media exchanged between peers), etc. Many popular WebRTC services are hosted today on AWS, Google Cloud, Microsoft Azure, and Digital Ocean servers. You can embed your WebRTC media to any WordPress, PHP, or other types of websites.

You can download the WebRTC load test tool from your account at antmedia.io. The test tool is listed with Enterprise Edition under the Download section of your Subscription. You can start using Ant Media Server for free with full features by subscribing pay as you go plan.

WebRTC SDKs for iOS, Android, JavaScript, React Native, Unity and Flutter are provided freely to enable customers to expand their reach to a broader audience. Thanks to the adaptive bitrate streaming feature, any video can be played at any bandwidth on web and mobile devices.

In this blog post, we looked for an answer to the question of what is WebRTC and got details information about the WebRTC video streaming protocol. We hope we were able to help you with this blog post. If you have any questions please feel free to contact us via contact@antmedia.io.